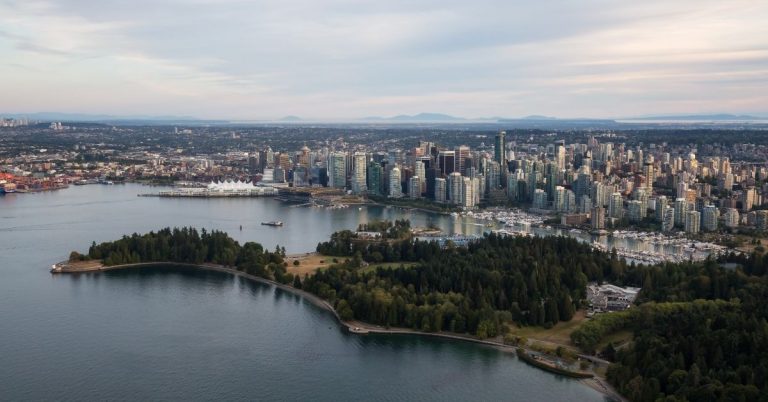 Stanley Park is one of Vancouver’s most popular tourist destinations. The 405 hectares of land is a mesh of woodland, trails, beaches, wildlife, seawall, an aquarium, and lots more.

Unlike most urban parks with artificial landscapes, Stanley Park is an evolution of forests and greenery over time. It is the perfect spot for wildlife lovers, families, and those seeking respite from city life.

The popular landmark is at the Northwest of Vancouver’s Downtown Peninsula.

The Genesis of Stanley Park

Stanley Park is the first and largest park in Vancouver. It is named after Lord Stanley, Canada’s sixth governor-general, on September 27, 1888.

Centuries ago, the area was home to different coastal communities including the Squamish Nation. Afterwards, it became a strategic military point during the Crimean war. Foreigners settled in the area after the Fraser Canyon Gold Rush, and the population has been growing since.

In 1886, the Dominion government rented it to the Vancouver City Council for use as a park. Two years later, it was officially launched.

What are Stanley Park's highlights?

Stanley Park has its fair share of famous historical and cultural milestones. This has earned it the designation of National Historic Site of Canada. Some of these landmarks include…

Near Georgia Street lies this beautiful freshwater lake. The 41-acre waterbody features the Golden Jubilee water fountain, and it is home to Canadian geese and ducks. During winter, the lagoon freezes and becomes an ice skating rink.

Surrounded by water and near Third Beach is the 32 million years old Siwash Rock – formerly known as Slahlayulsh, which means “he is standing up.” The rock inspires an oral, traditional tale of a fisherman turned into stone by 3 powerful brothers because of his misdeeds.

The Stanley Park Seawall is a paved pathway that loops through the park. This path is divided into two – pedestrian and cyclist lanes. The pedestrian lane runs clockwise while the other lane goes in an anti-clockwise direction.

From the seawall, you can admire the park’s attractions and take snapshots of places of interest as you walk, skate, or bike. Walking the entire loop takes about two hours while cycling is one hour.

Get a sweeping view of Lions Gate Bridge, North Shore Mountains, and Burrard Inlet from Prospect Point. Pick a window seat at one of the cafes and appreciate the perspective as you savour your meal.

Relax and have a meditative moment under the trees nestling the lake. The water-lily-covered lake harbours beavers and waterbirds. It also serves as a spawning habitat for salmon every year.

Watch fascinating displays of sea animals at the Vancouver Aquarium. The aquarium is Canada’s first and largest aquarium established in 1950.

It doubles as a tourist interest and a research centre. The 2.1-acre facility has about 65,000 animals like belugas, otters, orca, dolphins, etc.

Situated at Brockton Point is the park’s most popular landmark. The area displays the arts of First Nations. At the entrance is a three red-cedar wooden gate expressing the architectural designs of the traditional Coast Salish.

The main attraction is the collection of 9 totem poles from different areas in British Columbia. The totem exhibit started in the 1960s with the latest addition designed by Squamish National, Robert Yelton, in 2009.

Stanley Park has several sculptures, plaques, and artistic works dedicated to memories of people and events.

The heady scents and gorgeous display of blooming flowers as you stroll through the gardens in Spring or Fall will leave you spellbound. Stanley Park Gardens include;

The Second Beach is a kid-friendly zone with an outdoor swimming pool, playground, nearby field, and other amenities.

The Third Beach is in the western area of the park and is a great place for adults and kids to swim.

In summer, various events happen on these two beaches.

Stanley Park is a blend of forests, mountains, marshland, and seasides. The forest has giant trees and shrubs – some of which are centuries old. Dominant among them are Red Cedar, Douglas Fir, Bigleaf Maple, and Black Cottonwood.

About 500 species of animals live in the parkland, including varieties of birds, coyotes, raccoons, Great Blue Heron, and squirrels.

Stanley Park has about 27km of trails. The trails offer you a quiet natural ambiance away from the noise. Some of them are wheelchair-accessible.

What Activities Can I Engage In?

Stanley Park is never devoid of activities to engage in.

Take part in the different sports activities offered in the park, like Golfing, Tennis, Kayaking, and Fishing.

Every Christmas, Stanley Park holds the Bright Nights Christmas Lights. This family-friendly event features Christmas displays and glowing lights all over the park.

Engage your kids at the Kids’ Summer Fun Centre for loads of fun activities.

Where Can I Eat Stanley Park?

Stanley Park is not a place to leave without having a meal at one of the exotic restaurants. You can grab a quick bite at the Prospect Point Cafe, drink a beer at the Brewing Brewpub, or enjoy a special meal at the Teahouse.

You can access the parkland by your preferred means of transportation.

If you’re walking, skating, or cycling, enter through Georgia Street or the Seaside Bike route at the park’s west wing.

From the SeaBus, transfer to Translink #19. You can also hike or cycle through the Waterfront Coal Harbour trail into Stanley Park.

You can also sightsee from the comfort of your car as you drive through the park. The Stanley Park Drive extends to the outer end of the park and along it are most of the park’s most famous landmarks.

Buy an hourly or daily parking ticket at designated areas inside the park.